Making a Quality Campaign TV Ad for Under $100


Hey, I get it. I’ve been there. Sometimes you are in a campaign where you are vastly underfunded. Somehow, you have to even the scales so that the spending disadvantage is dramatically lessened.

While I don’t recommend this path, sometime when you are running for a down-ballot race and there’s not a lot of funding available, you have to figure out how to bootstrap a campaign. I’ve been there.

So, let’s discuss how to create and produce a TV ad - that’s not crappy and actually pretty decent - for under $100. If you’re opponent is spending $5,000 - $10,000 to produce an ad and you don’t, that’s a big equalizer. But it’s only an equalizer if your ad is not an embarassment.

Due to the miracle of the modern smartphone, you can now produce an ad that is high enough quality that it will look pretty decent. But this works as long as you don’t try to overreach on production. Here are the things you will need:

Today, in this smartphone era, that’s all you need.

The Script:  when drafting a script I like to lay it out in a table, with audio (or voiceover) on the right and images on the left. LIke this:

As you draft your script, break it up into small parts. Remember, in most cases, you won’t want a visual on the screen for more than 3 seconds. Visuals can be snippets of video or still images that dissolve into each other. Your stills can be images with the candidate, or stock images you purchase online from a site like Canstockphoto.com or a similar site.

For video, you can use your phone video camera, but BE SURE it’s in landscape (horizontal) shoot mode, not vertical. All images and videos - whether from a stock site or from your camera - need to be downloaded into a Google Drive or some other cloud-based storage site.

My recommendation is to write the script (or scripts) first, and then arrange for the images and videos to be created or purchased. Think in terms of 8-9 images/videos for a 30 second commercial. The final visual should be the campaign logo with - perhaps - a slogan or final message (keep it short).

Timing is very important. Most of the time - and I’ve written hundreds of scripts - I write everything I want it to say and then I begin mercilessly hacking away at words to get it down to a comfortable 29.5 seconds.

You will need to get your voiceover recorded. This can be done by the candidate or by a local DJ. You can also go online to services that have professional voiceover talent and have them record it for $25 - $75. If you want a quality, inexpensive voiceover done right, I have a recommendation if you email me.

Your voice over should be an MP3 or Wav file and is an asset that should be saved in your Drive with the images and videos.

Once you have them all assembled, you open up your video production software. For me, iMovie is easy and intuitive. I load my assets into iMovie from the Drive or Dropbox and then begin dragging the audio into place down below. After that, you drag the visuals into place and using the tools provided, stretch them to the length you want. Finally, you can use some of their stock background music or find your own on the Internet for about $10 - $25 for royalty free.

One part to consider is the use of captions to help reinforce a point. If the main point of your message is that property taxes are too high, you may also add a text box at the bottom of a photo that says ‘Lower Property Taxes’ or something like that. Video editing software makes this very easy and also gives you the opportunity to choose font and font color.

One other issue to think about is fading in and out of black at the beginning and end. Actually, don’t think about it, just do it. The software makes it easy and it will make it look more professional. And the local cable company will likely require it.

You may also want a Title frame before it starts that gives the name of the campaign, the date, the length of the ad and the title of the ad. Just plain white text on a black background is sufficient.

If you’ve never used iMovie before, it might take a some practice. Or better yet, pay a student $25 to help you put it together. But, I have never been trained in how to use it and I have learned how to make videos that might fool the experts.

So what is your budget:

$25 for a student to assist in putting the video together

$25 for a video editing program


Let me emphasize, if you can afford to have professionals do this for you, then by all means, take that path! But, if you're a candidate - like most - who will not be able to afford a professional TV consultant or the expense of having a studio produce your ad, then this is a viable alternative. Don’t let the naysayers or skeptics steer you away. More than one successful candidate has bootstrapped their way into office.

Back to blog
★ Judge.me Reviews

Let customers speak for us

Everyone loved them! Very durable. Extremely happy especially with it being my first install. 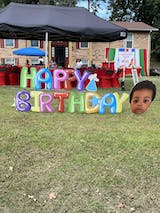 Exactly what I needed. Great customer service and quick turn around time from order to delivery

Came out exactly like Shown.
More packages than happy with finished product.
Will definitely use this service again.

We were very happy with these pieces. We use these as a fundraiser. We were initially just going to use them as filler with other packages however we are putting together a great fundraiser "flock" with this alone!!

We love this package. Since we use this as a fundraiser we did not do the personalized name. The letters are a great size, bight and vibrant. Very happy with this!!